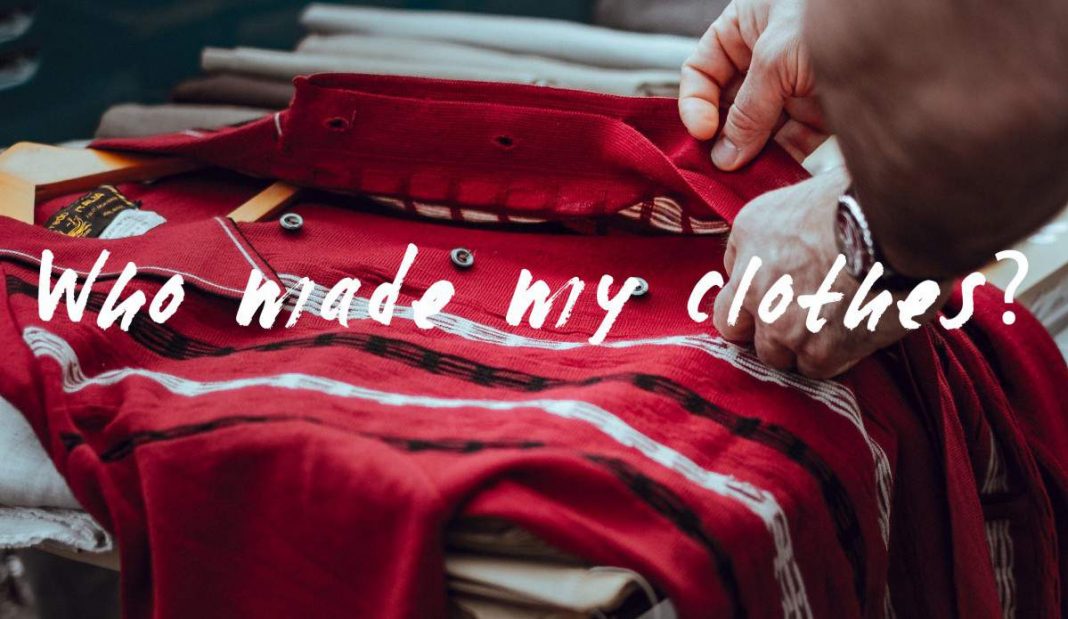 You must have heard about “Who Made My Clothes” Movement but do you know who started it, why it was started, what’s its importance and what is its impact? Read about it in this article.

The “Who Made My Clothes” movement was precipitated by the collapse of the Rana Plaza building 5 years ago.

Not only did it take the lives of 1,138 clothes makers in Bangladesh, injuring 2,500, it also removed the blinkers on a capitalist fast fashion industry that should be renamed crapitalist.

An industry where global brand owners think it’s acceptable to pay offshore factory workers a pittance while passing on a minuscule percentage of the saving to the public and lining their own hand finished pockets with the largest slice of the pie.

In light of the fast fashion disaster, a much-needed revolution was necessary and it came about with the birth of the Fashion Revolution, the instigators of the movement.

Who Started the “Who Made My Clothes” Movement?

The brainchild of two women, Orsola de Castro and Carry Somers this global campaign with participation in over 100 countries was launched in 2013 in England.

Orsola’s background is as an internationally recognized opinion leader in sustainable fashion.

Prior to this her fashion career began as a designer with the pioneering upcycling label From Somewhere, which was launched in 1997 until 2014.

In 2006, she co-founded the British Fashion Council initiative Estethica at London Fashion Week, which she curated until 2014.

Co-founder, Carry Somers was inspired to act after the Rana Plaza factory collapse in Bangladesh in 2013. For the last 20 years, Carry’s fashion brand Pachacuti had pioneered radical supply chain transparency, mapping the GPS coordinates of each stage of the production process; from the community plantations where the straw grows, through to each Panama hat weaver’s house.

Championing the traditions, quality and craftsmanship of the Andes, her collections were shown at London, Paris and Milan Fashion Week and sold in some of the world’s finest luxury stores.

Why was the “Who Made My Clothes” Movement Started?

With backgrounds at the core of sustainable fashion, Orsolo and Carry were well placed to precipitate the call for a fairer, safer, more transparent fashion industry.

Their mission was to unite everyone in the fashion industry, from the designers, makers, distributors and wearers, to work together towards changing the way clothing is sourced, produced and consumed.

The collaborative efforts of the whole value chain – from farmer to consumer – are the only way to transform the industry into any semblance of workability.

Their mission is to inspire a change in an industry renowned for not always value people, the environment or creativity more than profit.

Fashion Revolution love fashion, with a self-penned title ’’pro-fashion protesters’’ and with this in mind, they celebrate it while scrutinizing industry practices and raising awareness of the industry’s most important issues.

No specific companies are named and shamed as they feel that the whole industry should be held accountable, not the individual.

Brands are encouraged to recognise that they have the power to do something to instigate positive change. They’re not advocates of boycotting for the simple reason that it’s an ineffective way to achieve systemic change.

The Fashion Revolution global movement runs throughout the year and promotes a wide range of fashion revolution events.

Highlights include a film screening that shines a light on the woes of the industry in The True Cost shown before clothes swapping/networking event, in the Netherlands.

UK based events include Making Workshops on Social Enterprise Saturday. The public is encouraged to celebrate and raise awareness of social enterprises in cities, towns and villages across the country.

Visiting the participants, buying from them and learning about the impact they’re having is a central part of the campaign.

Australian Vogue’s first ever Sustainability Editor-at-Large, Clare Press is presenting an exclusive clothes swap and book launch event in Australia. The main event, however, is the yearly conscious collective effort of the Who Made My Clothes movement.

Called Fashion Revolution Week 23 – 29th April, it is held on the anniversary of the Rana Plaza disaster.

Fashion Revolution provides a list of all the major brands on their get-involved page.

Other action can be taken in the form of printing a pre-made poster to use in a selfie shot.

What’s the Impact of “Who Made My Clothes” Movement?

The movement has gathered such momentum that alternatively worded posters such as #Imadeyourclothes are now being used by the makers whose working conditions have improved since the launch of Fashion Revolution.

Other action that can be taken includes the sharing of the campaign assets and messages through social media. A list of event suggestions that the public can organize, is also listed.

The ten point Fashion Revolution manifesto is a combination of policies and aims that the fashion industry should aspire to. It’s something that will take time to realise, of course, but it’s long overdue.

#1 For fashion to provide dignified work, from conception to creation to catwalk. It does not enslave, endanger, exploit, overwork, harass, abuse or discriminate against anyone. Fashion liberates worker and wearer and empowers everyone to stand up for their rights.

#2 For fashion to provide fair and equal pay. It enriches the livelihood of everyone working across the industry, from farm to shop floor. Fashion lifts people out of poverty, creates thriving societies and fulfils the aspiration.

#3 For fashion to give people a voice, making it possible to speak up without fear, join together in unity without repression and negotiate for better conditions at work and across communities.

#4 For fashion to respect culture and heritage. It fosters, celebrates and rewards skills and craftsmanship. It recognizes creativity as its strongest asset. Fashion never appropriates without due credit or steals without permission. Fashion honours the artisan.

#5 Fashion stands for solidarity, inclusiveness and democracy, regardless of race, class, gender, age, shape or ability. It champions diversity as crucial for success

#6 Fashion conserves and restores the environment. It does not deplete precious resources, degrade our soil, pollute our air and water or harm our health. Fashion protects the welfare of all living things and safeguards our diverse ecosystems.

#7 Fashion never unnecessarily destroys or discards but mindfully redesigns and recuperates in a circular way. Fashion is repaired, reused, recycled and upcycled. Our wardrobes and landfills do not overflow with clothes that are coveted but not cherished, bought but not kept.

#8 Fashion is transparent and accountable. Fashion embraces clarity and does not hide behind complexity nor rely upon trade secrets to derive value. Anyone anywhere can find out how, where, by whom and under what conditions their clothing is made.

Until the brands with clout put people before profit, the exploitation of workers will continue.

Factory owners are placed in a difficult situation knowing that if they refuse to accept the work it will be offered to another factory for less, and they will accept it otherwise their workers will starve.

This situation is unacceptable as no one should be dying for the sake of fashion. As citizens of a democratic society, we all have the power to instigate change simply by educating ourselves in regards to the state of fashion by reading the Fashion Revolution and signing the manifesto.

People of the fashion world unite.

What steps are you taking as a customer, designer, factory or an expert; in providing a sustainable environment? 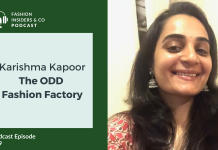 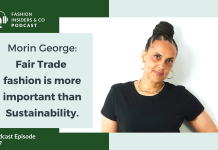 E37: Morin George – What is Fair Trade Fashion? Is it the same as Sustainable Fashion? 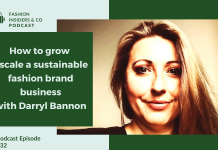 E32: How to grow & scale a sustainable fashion business with Darryl Bannon