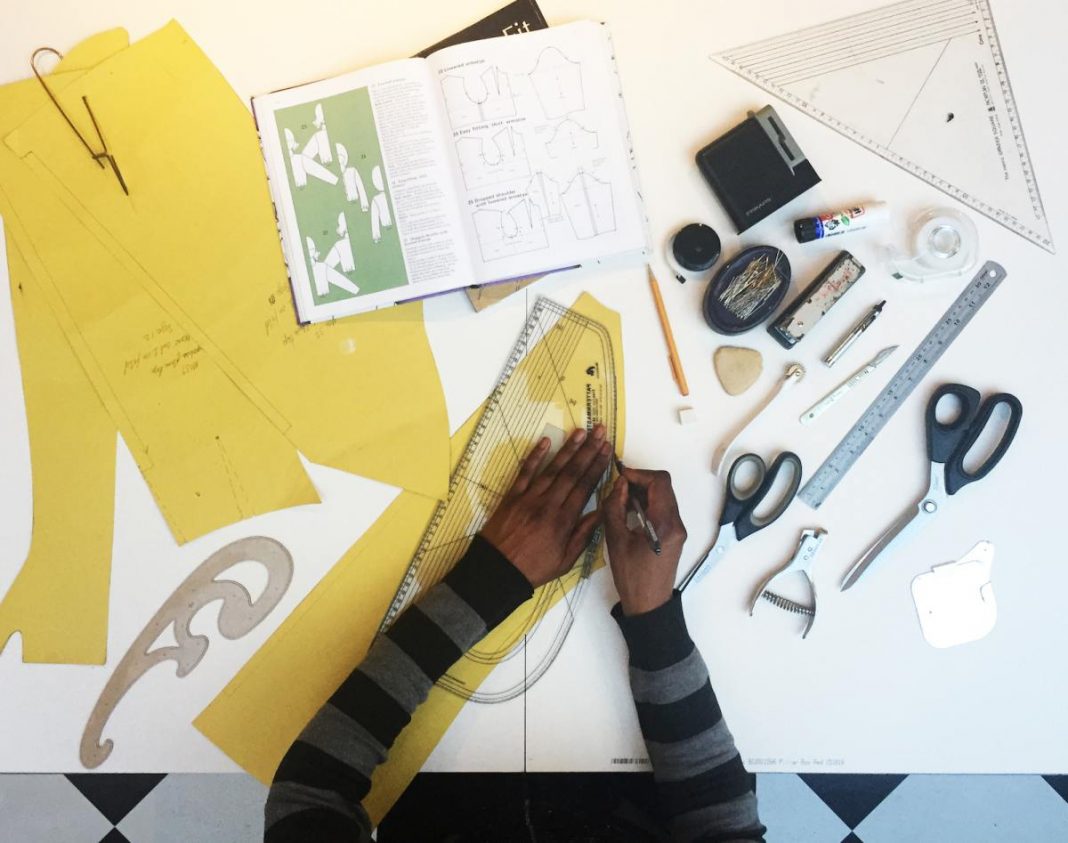 I met British-born designer and pattern cutter Monisola Omotoso through a fashion event we both attended. We hit it off immediately and over time have collaborated and worked together on various projects. It is only natural to share her expertise and skill with rest of the world. Whilst busy launching a new accessories fashion brand and juggling her pattern cutting consultancy, we managed to snatch little time with her and chat to her about all things creative pattern cutting.

Moni studied for a BA (Hons) Degree in Fashion and Textiles, at Middlesex University. Upon graduating, she spent a decade running her contemporary womenswear brand, which was sold in Europe, America and Japan. After securing financial backing from Evian, she went on to develop a maternity wear range, which was sold in Harrods and niche boutiques in England.

How did you get into the industry? Did you study fashion originally?

I studied fashion at the great Middlesex University. Their focus was more on the technical aspects of design. This really resonated with me as I wanted to understand the fundamental aspects of designing clothes, which to me were pattern cutting and construction.

Where did you learn pattern cutting?

While I was studying for my degree at Middlesex University I really fell in love with creative pattern cutting. This method of pattern cutting is really serendipitous and very creative. The process involves attaching bias cut fabric onto a mannequin. It’s then manipulated and pinned into place before removing it and turning it into a paper pattern. On my degree, I had the most supportive year tutor who was always singing my praises and saying that I was an original designer/pattern cutter. This support encouraged my development and love of the different pattern cutting techniques. I also had some sessions one-on-one with Louis Loizou, a senior Pattern Cutting tutor at Central Saint Martins.

What do you love about pattern cutting?

Firstly, the fact that maths now makes sense to me. I was terrible at the subject at school until I discovered pattern cutting. My ability to see flat drawings three-dimensionally, which allows me to visualise the flat pattern as a formed garment, that really excites me. The thought that I’m creating the blueprint for a design, and that it must work on the body, is the challenge I like.

What would you say makes a good pattern cutter?

Having a good eye for the aesthetics of the garment, an ability to place and size things such as collars, pockets and lapels. Having high concentration levels, an eye for detail, and good IT and traditional drawing skills to translate designs into patterns. An understanding of clothing construction is also very important in order to make the link between each pattern piece so that they become a wearable garment.

What misconceptions are there about pattern cutting?

Within the industry, the roles of designer and pattern cutter are mutually exclusive. This is really strange, in my opinion, as without the Pattern Cutter, the designer’s vision can’t be realised. If I didn’t have the skill and a deep understanding of garment construction I would have had to employ someone to explain my designs to me and check that they would work! It does the industry a great disservice to underplay the pattern cutting role.

I must admit that I love both methods, but draping has a slight edge. Draping allows one to be more creative and works well when the designs are soft and bias-cut. I mainly focussed on draping while at University as it was more challenging and interesting. Draping was originally the traditional method while flat pattern cutting is more contemporary. The process itself is rather lengthy, but the results are so satisfying that it’s worth the effort. It’s a process that was originally used to transform a flat clothing design into a three-dimensional form. Through the ages, garments were classified as either ‘draped’ or ‘fitted.’ However, in the fashion world of today, the draping process can be applied to both loose and fitted garments.

It’s a more contemporary method of pattern cutting used in fashion companies that produce larger volumes of clothing with a simpler, less technical cut. It’s a more precise method and much faster than draping, but it’s possible to combine both patterns cutting methods in one garment. For instance, jacket collars can be created successfully with the draping method.

You need a pattern block – a custom fitted, basic pattern from which patterns for many different styles can be developed. This is used to create patterns on the flat. Blocks can be made in many different styles such as fitted jackets, casual jackets, trousers, skirts, dresses and coats. All the important features, such as waistline, bust point, armhole placement and hip line placement, are marked onto the blocks. From these blocks, you’re able to manipulate dart placement as well as to add design lines, change hemlines and even widen trouser legs. Blocks are available, pre-bought or can be made by the pattern cutter. I use the Winifred Aldrich pattern cutting books, as they’re a great resource for flat pattern cutting.

What should one know before selecting a pattern cutter? How do you know who is the right choice?

It’s a good idea to select a Pattern Cutter who specialises in your area of design. Initial training for pattern cutting is general, but once a student specialises the focus is usually on one or two areas. The different areas pattern cutters specialise in include womenswear for tailoring, jersey, soft separates, outerwear, underwear, handbags and accessories. It’s also worth considering which pattern cutting process your designs require – flat, draped or a mixture of both? If for example, your designs were a selection of bias-cut, draped dresses then a pattern cutter with draping expertise should be your first choice. Most pattern cutters should be adept at both flat and draping but it is still good to check.

Can anyone learn how to pattern cut? How long does it take to acquire a decent level of skill?

It is possible to learn pattern cutting by attending a short course of only a couple of hours. Of course, the professional pattern cutter has been honing their craft for years and as with any creative skill, practice makes perfect. If you were just beginning I would suggest buying some second-hand clothes and deconstructing them. This will show you what the different pattern pieces originally looked like before the garment was made. Drawing around the sections, onto paper and making a pattern will really deepen your understanding of what pattern cutting entails. I also think that the best pattern cutters are those with a natural flair for and love of design.

Do you teach classes or one-on-one sessions?

I’ve been teaching pattern cutting for over five years now. I was the tutor of the cult Pattern Magic classes and Draping classes at Morley College. I was also the design/technical tutor for accessories at LCF Cordwainers. I now teach small groups of up to four students, but my one-on-one sessions are more popular. I teach from my home in East Dulwich but also visit clients at their homes. I’m developing my website patterncuttingdeconstructed.com, at the moment. On the site, you’ll find e-courses on pattern cutting for clothing and handbags. It’s pitched at the intermediate level with a good mix of draping and flat pattern cutting techniques. I will also be offering pattern cutting classes for handbag development, at a great space in Stratford, London. There will be a good selection of machines that can be used to create mock-ups of the patterns.

What do you need to know before you start learning pattern cutting?

A lot of newly trained pattern cutters learn how to do it with technology, while the old way is manual – what do you think about that?

I am an old-school creative pattern cutter but understand the value of learning computer-aided pattern cutting. As we’re living in an age of great technological advancements it would be wise to consider this avenue. There are a few options on the market, also known as the CAD or Gerber methods.

The construction procedure for computerised pattern cutting is very similar to the creative method. A set of measurements will be developed based on the specific design. These measurements are then inputted into the computer. 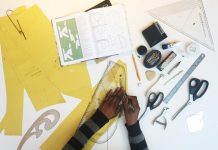 Should I Have a Pattern Ready Before I Contact a Factory?