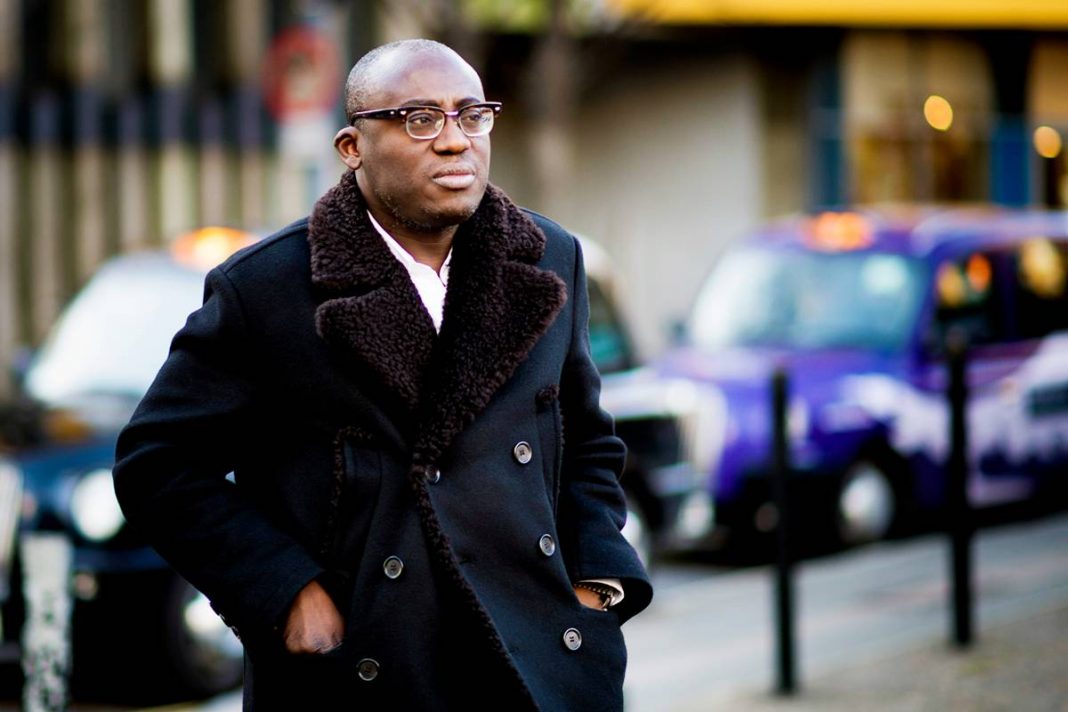 The appointment of Edward Enninful as the next Editor for British Vogue is a bold move. Monisola Omotoso examines why his appointment is most welcome and anticipated.

Out with the old guard and in with the new.

These were my thoughts when the news broke that Edward Enninful was to be appointed an editor of British Vogue.

That, coupled with sheer joy.

At last a well-established British institution was opening its mind to change. Change not only in the form of overhauling the image and reach of the magazine to welcome the influential millennial readers, but change in demographic terms also.

As a black, gay male Edward Enninful couldn’t be further from the magazine’s previous editors, Alexandra Shulman, Elizabeth Tilberis and Anna Wintour. In fact, Enninful’ presence will be in stark contrast to Vogue’s stable of white middle-class women. In addition to this, his championing of diversity is something to be revered. It would be so easy to be in his position and to continue with the tired one-sided representation of the fashion world.

Diversity aside, what does his appointment actually mean for British Vogue?

In my opinion, London is the home of street style, where original ideas are born and experiments are made. Under Shulman’s hugely successful 25-year tenure at British Vogue, I never felt the magazine really reflected this. With a background in fashion journalism and as a published author she grew up in Belgravia. The readership reflected her background as it appealed to a middle to upper-class ideology of a fashion style for ladies who lunch, rich kids and the landed gentry. Her constant use of high profile established designers and the inclusion of a society page set Vogue’s tone of voice and established itself as one that was defined by the oh so fashionable London neighbourhoods that are the stomping ground of British Vogue. Notably, West London to be precise, with the Notting Hill set and Portobello stalwarts.

Enninful, while hailing from a Ladbroke Grove that was much poorer than it is now, has a very different point of view. His fashion career began on the other side of the camera. Discovered by the super stylist, Simon Foxton, Enninful was indoctrinated into the fashion world when he modelled for Simon at his house in the late 80’s. He was then introduced to Terry and Trish Jones, the owners of ID magazine. He worked there, initially assisting Beth Summers, until he was appointed fashion director. He held the position from the age of 18, becoming the youngest ever fashion director of an international publication, and remained there for two decades. His quirky edgy elegance became his calling card and he drew much of his inspiration from the streets. As he himself said, ‘We British have to customise our clothes, we have to be more creative, informing who you are – and I am still obsessed with the streets.’

Edward Enninful’s irreverent take on fashion was exposed further when he became Italian Vogue’s contributing editor in 1998. Working with the late Franca Sozzani and the American photographer Steven Meisel allowed him to mature as a stylist. It also introduced him to other British “behind the scenes” talents such as the make-up artist Pat Magrath, hair stylist Eugene Souleimann and photographer Craig McDean. He collaborated with them and created fashion stories that were often infused with a strong narrative and provocative elegance. Their talent, no doubt, will continue to be used while Enninful is at Vogue.

One of Edward Enninful’s most influential works is Vogue Italia’s July 2008 ‘All Black’ issue, featuring only black models including Naomi Campbell, Jourdan Dunn and Alek Wek. He described his intention as ending the “white-out that dominates the catwalks and magazines”. The issue was so successful that Condé Nast had to print an extra 40,000 copies making it the magazine’s top-selling issue.

Edward  Enninful continued to shake up the industry with his inclusion of diversity and risqué editorial content when he took over at W magazine in 2011. His focus was solely on reviving the magazine so he ended his ten-year freelance positions with American and Italian Vogue.

His appointment as the new British Vogue editor is a clever move and reflects Vogues more modern approach to digital with a shift towards attracting a trendier, younger crowd.

Vogue’s digital strategy reflects huge changes in how consumers relate to brands. Their findings have deduced that 65% of their magazine traffic stems from mobile devices – 10% from tablets and 55% from smartphones. Through analysing consumer trends and data it is now possible to give readers what they want.

Content, editorial and advertising strategies are now tailored to suit the consumer. The most efficient digital platform Vogue works with is Instagram. Not in regards to a traffic-driving perspective, as that is minute, but in terms of engagement it is incredible. The depth of engagement is so strong that it ignites genuine conversations. As soon as you’re aware of what your consumers desire, you’re in a better position to provide it.

Edward Enninful’s appointment will further increase the positive results in digital. Renowned for his wide social circle and vast influence within the fashion crowd, he is young enough to be in tune with the millennials who have a huge amount of spending power and who relate to his love of social. He has a big fan-base on Instagram and they will inevitably follow him once he starts at Vogue in August.

By tapping into his broad social reach and continuing to work with social media influencers such as Gigi Hadid and Adwoa Aboah, he can help to expand Vogue’s readership to include a younger, aspirational group of consumers. His connection with a celebrity audience resonates with the vogue demographic as they’re equally passionate about celebrity gossip.

Both the social media fans of Enninful, along with the vogue audience, are drawn to luxury fashion brands. However, there are marked differences between their choices. The Vogue fans prefer established brands such as Balenciaga, Chanel and Gucci and mix these expensive labels with ASOS and Topshop purchases. Enninful fans combine their love of high-profile fashion houses with up-and-coming, trendier designers like Mary Katrantzou and JW Anderson. Enninful will be in the perfect position of merging his love of street style with high-end designer wear. What’s more, Vogue readers prefer in-store experiences at luxury department stores like Selfridges, while Enninful’s audience like to browse online, with Net-a-Porter being their favourite website.

When Enninful takes over the reins at Vogue, his appointment will foster a stronger digital presence with a focus on supporting emerging fashion talent. These new brands are all about using video as a means to connect with their audience. Vogue feels that video will be a real pioneer over the next five years as it taps into its consumers love of storytelling and fantasy. With a stable of very strong creative talent to take advantage of, combined with Enninful’s hip and relevant connections, Vogue’s transformation will begin in earnest.

With his historic ability to rejuvenate magazines with his creative editorials, Vogue is in for a treat. Merging the old with the new is a recipe for success as you can’t have one without the other. I’m sure I can speak on behalf of everyone with an interest in fashion, and say “ Congratulations Mr Enninful and the very best of luck.”